Five friends meet each other once a year at another place on the globe for one day and play their memory game. In 2010, they meet in Berlin, a place where countless strings of memory come together at the focus of one place which is standing for the more than 6 millions of murdered Jews, the Memorial for The Murdered Jews in Europe.
The video was filmed in Berlin, Budapest and Auschwitz and is released on occasion of 65th return of the Liberation of the Concentration Camp Auschwitz on 27 January 2010.
. 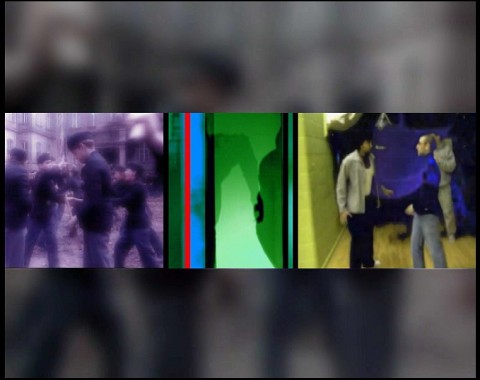 synopsis
The house of tomorrow is the house of one’s identity, it does not need to be a concrete house or building, but represents a secure and protected place where people can stand for what they are and represent, a human being. And this human may have many identities in different fields, the sexual identity represents only one among many others.

Title:
RED: One Day on Mars

Synopsis
A human being is obliged to spend at least one day in his lifetime on Mars. Mars the red desert planet, Mars the god of war. Mars can be anywhere, any place which is identified with the inhuman, violence, hate, rage, revenge and despair.
Agricola de Cologne filmed the original material 2006 during a visit in Palestine & Israel.

Short synopsis
Silent Cry is the visualization of an internal cry happening all the time, when society does not allow to show deep emotional affection. The silent cry is always present caused by never ending traumatizations during decades hidden behind the facade people wants to see.
And even if the cry would be be seen or heard, people would refuse to face it.

Short synopsis
English title: Timed Out
The experimental video is dedicated to the artists dying mother.
It offers an intimate view on a relation based on a deep emotional closeness and long distance.

The hairdryer becomes a symbol for desire.

Title: Burning Phantom
2009, 1:00
Love is a burning phantom. It comes unexpectedly and vanishes without any warning.